In a small town at the north end of Buckinghamshire sits a fairly unassuming industrial estate, the type of which can be found in small towns across the UK, with businesses making uPVC windows, moulding plastic components and selling building supplies. It’s not until you notice that some of the cars parked around this estate don’t quite fit the picture that you realise something a bit special is going on here. In between the usual Mondeos and Qashqais, vintage Aston Martins, Rolls-Royce and Ferraris sparkle in the sunlight, and the air is filled with the sound of planishing hammers beating against steel.

This modest estate is home to a number of skilled engineering and restoration firms who specialise in different high-end vintage marques, meaning these few rows of industrial units potentially contain the highest concentration of million pound plus cars you’ll see outside of a Concours d’Elégance.

Today we’re not focusing on these cars, however, we’re focusing on something a whole lot more humble, albeit with both a provenance and an owner that link it to Aston Martin in a number of ways. The owner is Paul Temple and this story is about his Interstyl Hustler. 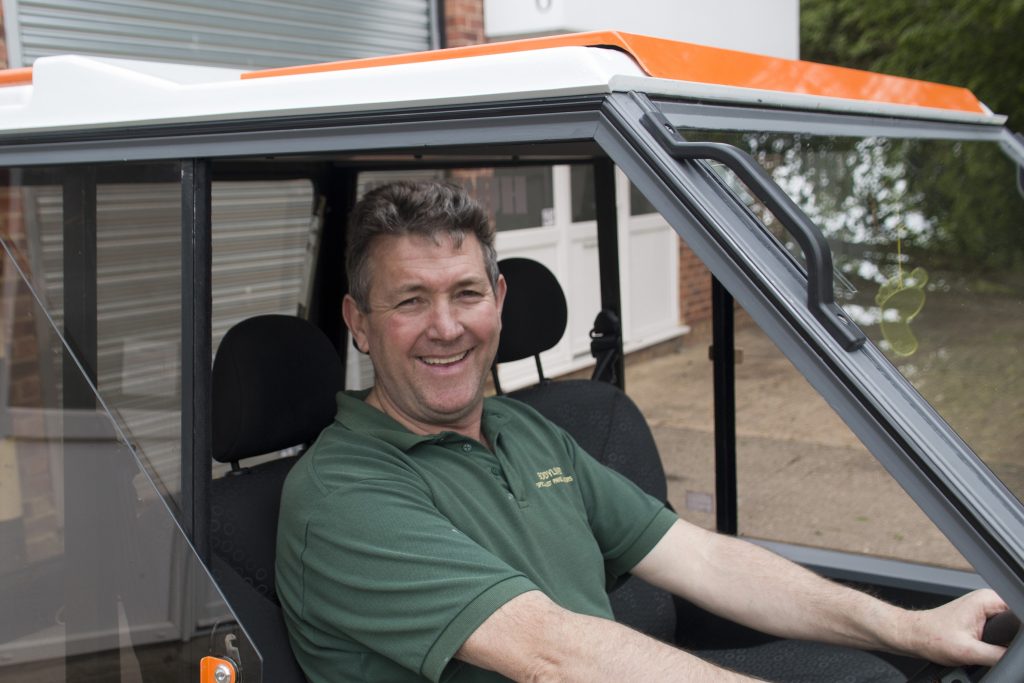 Paul works as a panel beater at Bodylines, an Aston Martin restoration specialist. He’s been a car enthusiast since a very young age, having Trevor Walklett of Ginetta as a family friend. Trevor would send him brochures of Ginetta’s latest offerings, which ignited a love in Paul for these hand built road and race cars. When he left school it was only natural he found a vocation where he could work with cars, but his panel beating career began by chance, after turning up for a trimmers apprenticeship at Aston Martin and being told, “we haven’t got any trim jobs, but you can be a panel beater if you want.” During his early years at Aston Martin, Paul worked on the wedge shaped, futuristic styled, Series 2 Lagonda saloons they were producing at the time, before following his mentor who left to set up Bodylines in the late 80s. He’s been restoring Astons, Ferraris, and anything else exotic requiring handmade body panels, ever since. 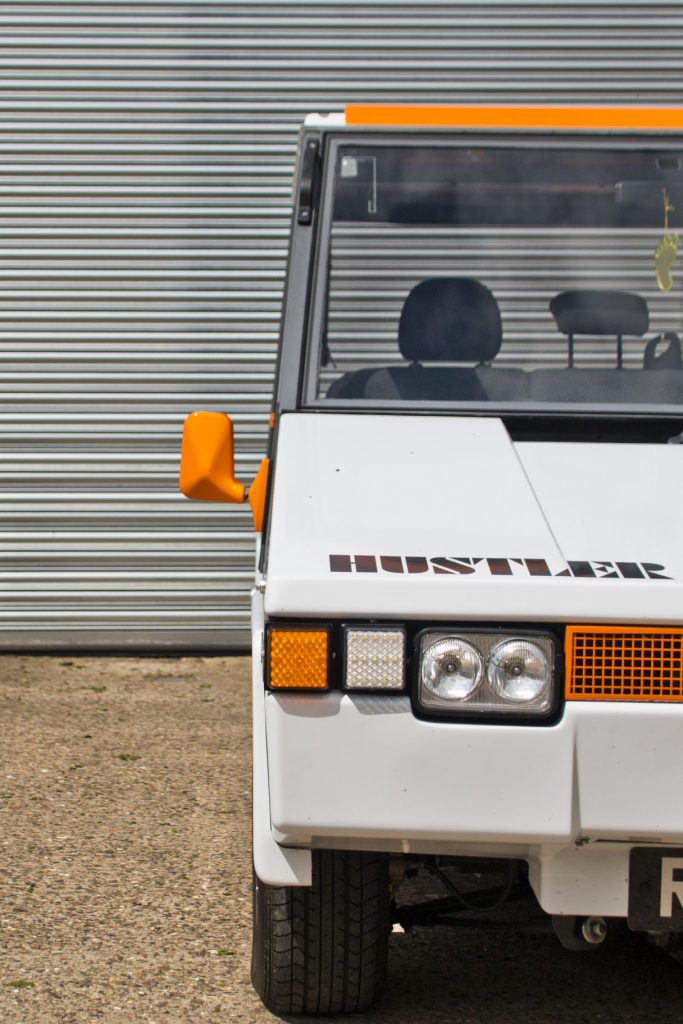 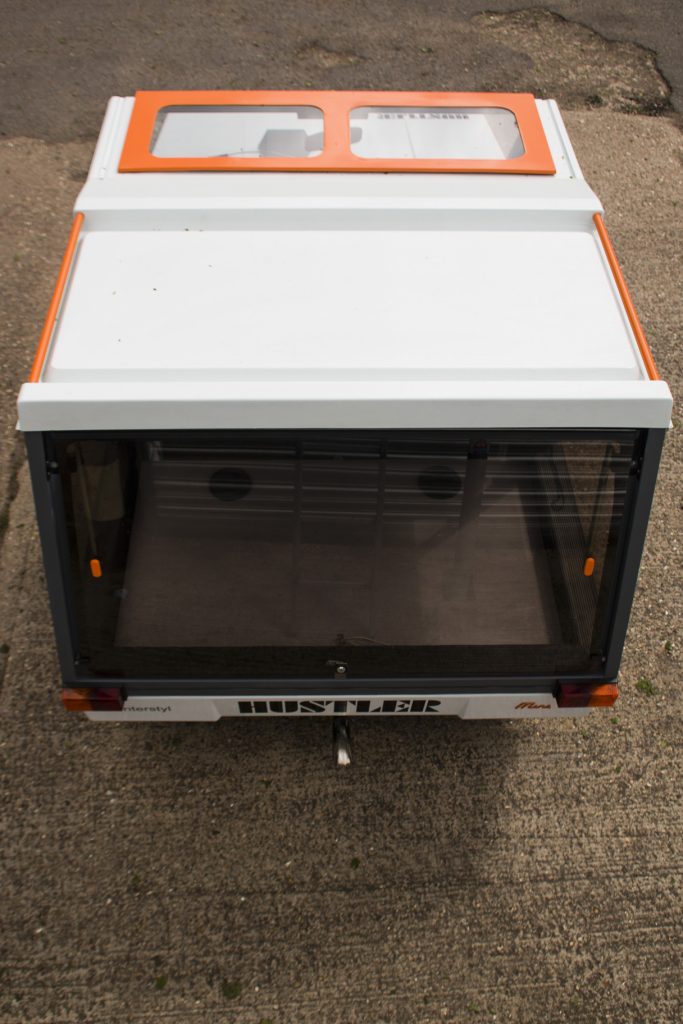 It was on holiday on the east coast of Scotland that Paul first encountered a Hustler, buying an ice cream from a pint-sized, six-wheeled ice cream van. Asking the ice cream seller what kind of vehicle it was, he told him “you know the Lagonda, the same chap designed this.” The chap he was referring to was William Towns, initially employed by Aston Martin as a seat designer in 1966 and working his way up to leading the design of the Lagonda in the 70s. When he left Aston Martin in 1977, Towns set up his own design studio, Interstyl. Here he drafted the Hustler, which was initially planned as a military vehicle to be built by Jensen but subsequently produced by Towns as a kit car built on Mini base when the Jensen plans fell apart. 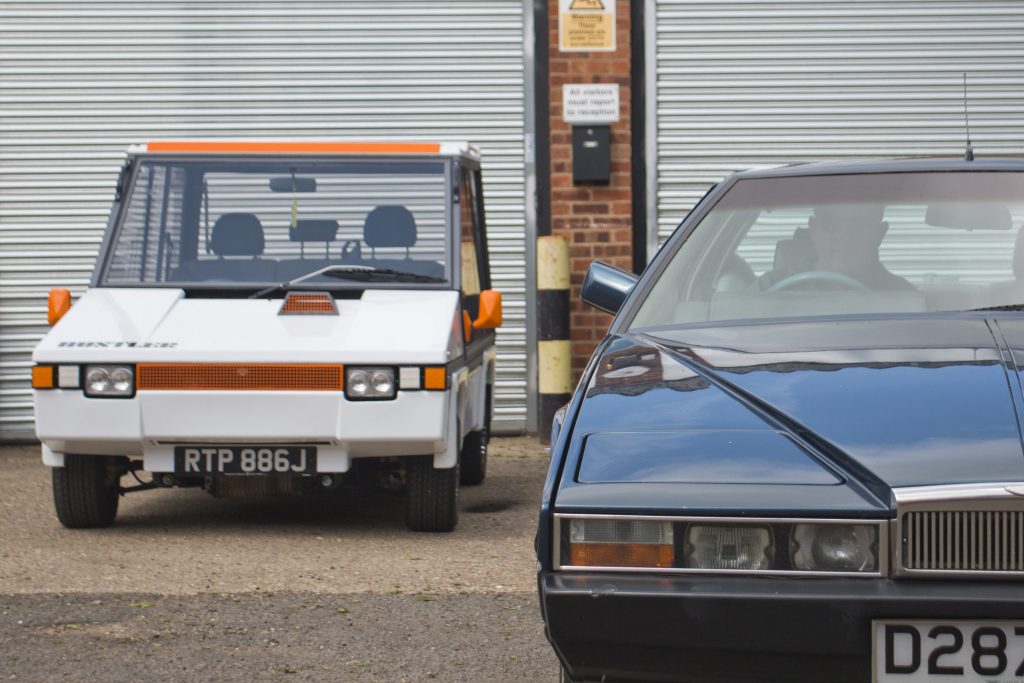 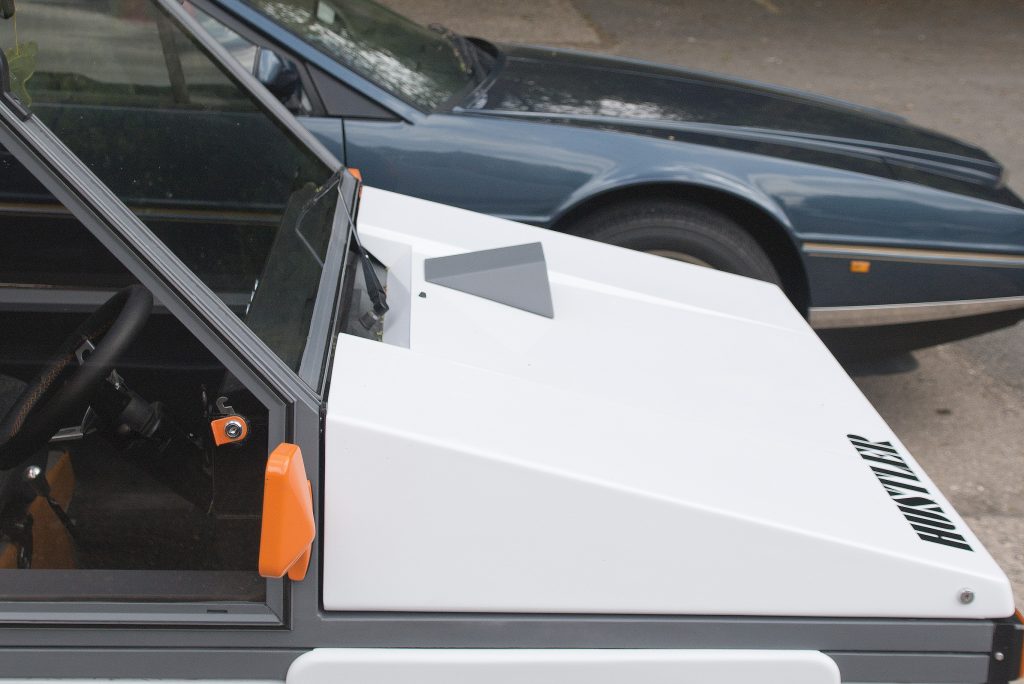 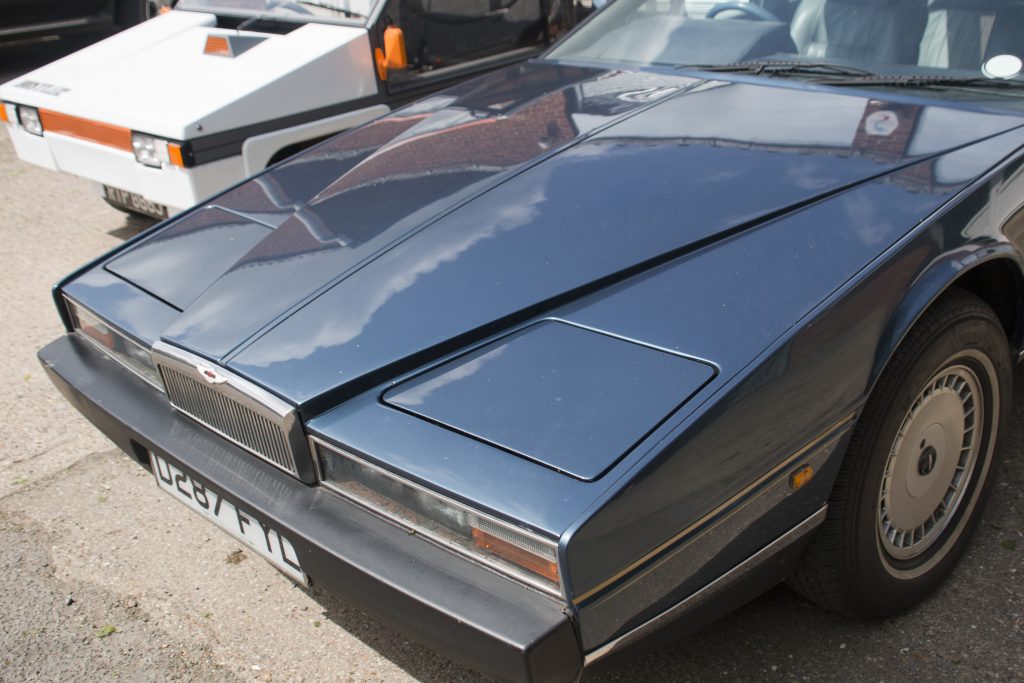 Clearly a man who preferred a set square to French curves as his weapon of choice when drawing, Towns was responsible for a number of rectilinear rides during his career, including the AM Bulldog, Reliant SS2 and Microdot city car. Towns achieved relative success selling the Hustler as a kit car, producing roughly 500 of them in six-wheeled and four-wheeled, utilitarian and sporty variants, in both fibreglass and marine plywood, including the ‘Vendavan’ version employed by the ice cream seller. 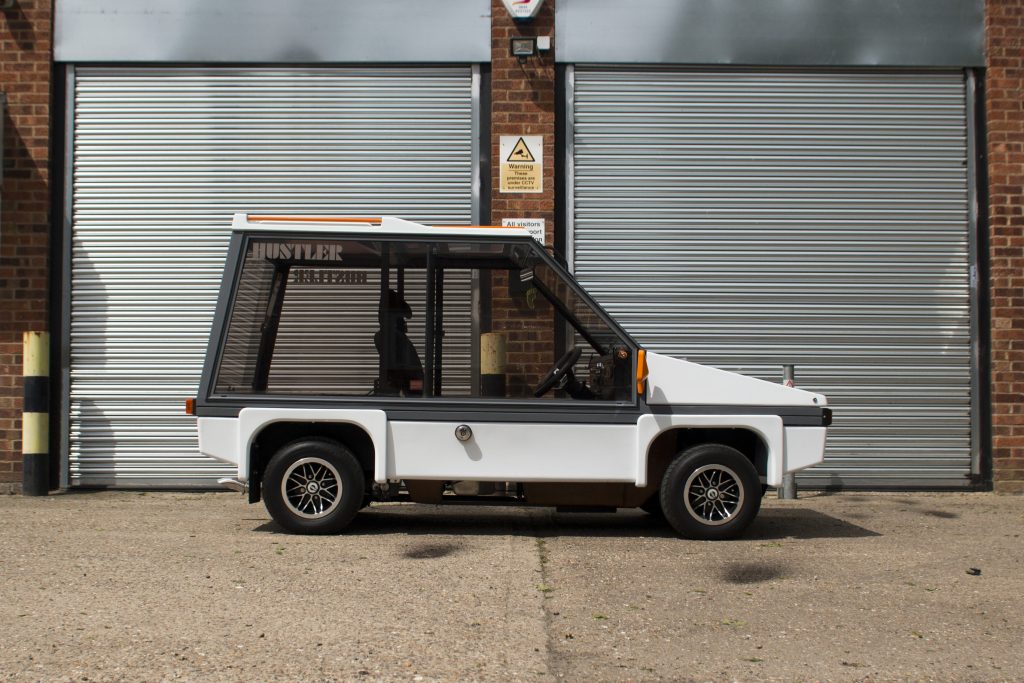 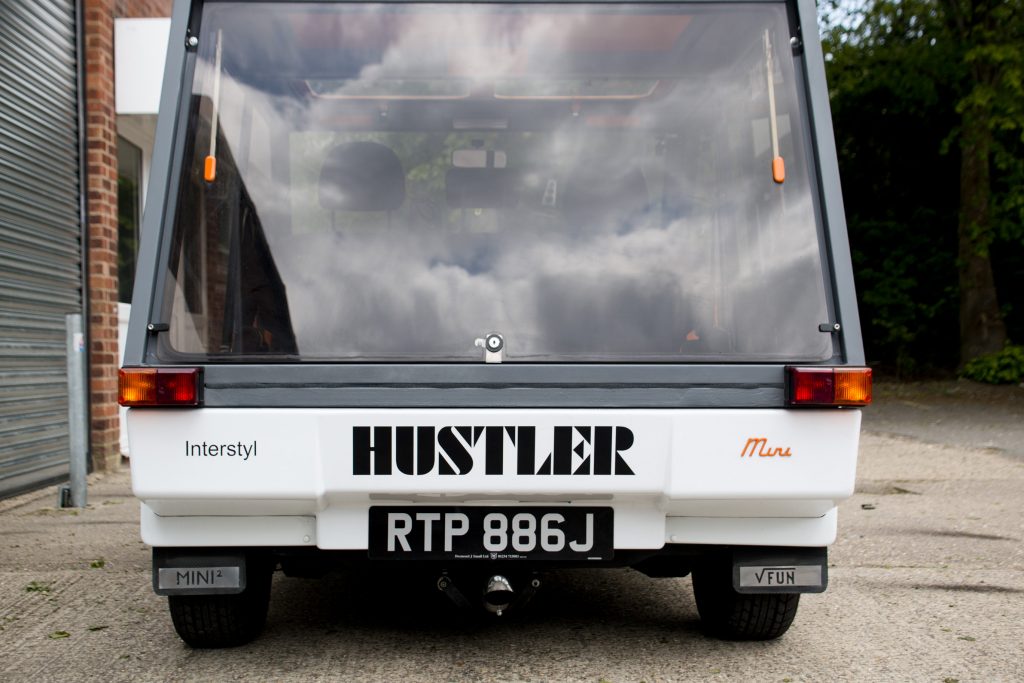 From learning more about its origins and link to his early career, Paul knew he had to have a Hustler and set about searching eBay to find one. His search turned up a four wheeled fibreglass project so he borrowed a trailer and went to pick it up. 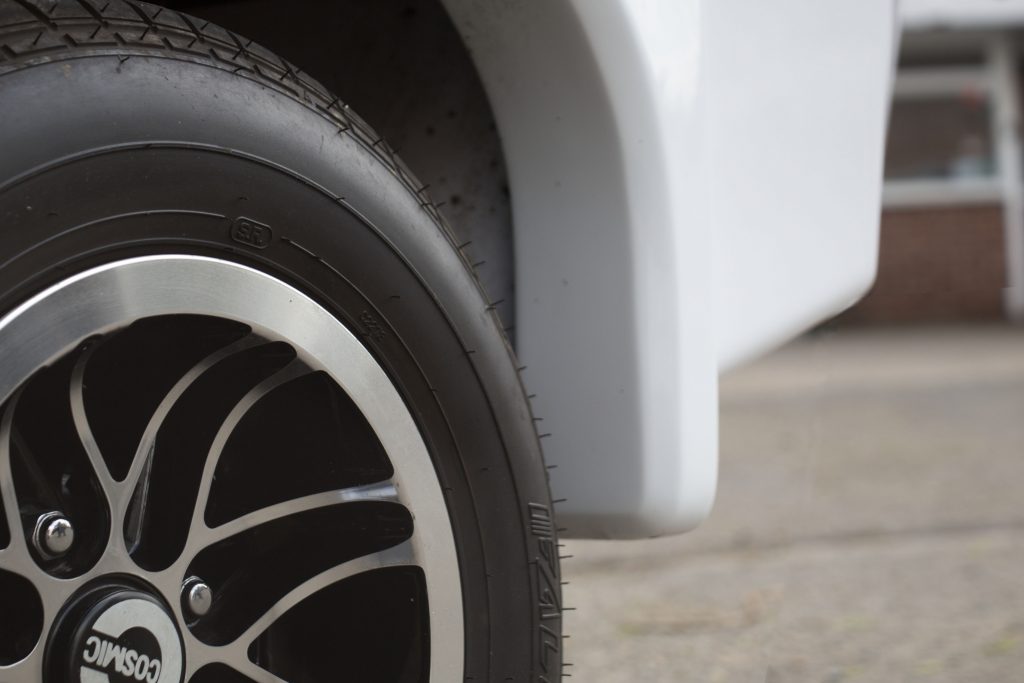 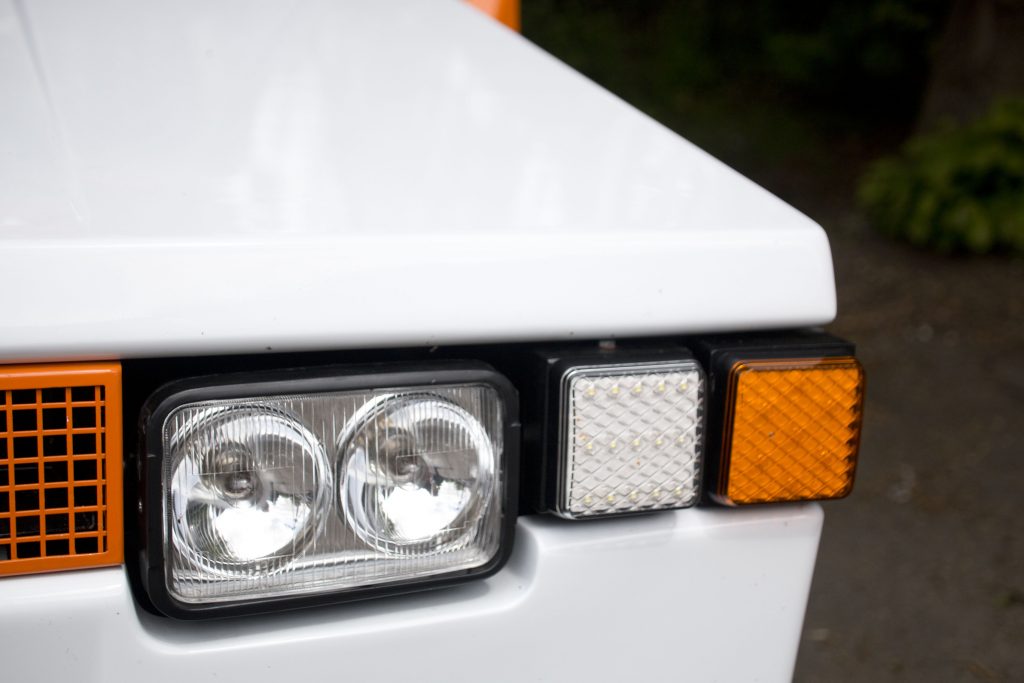 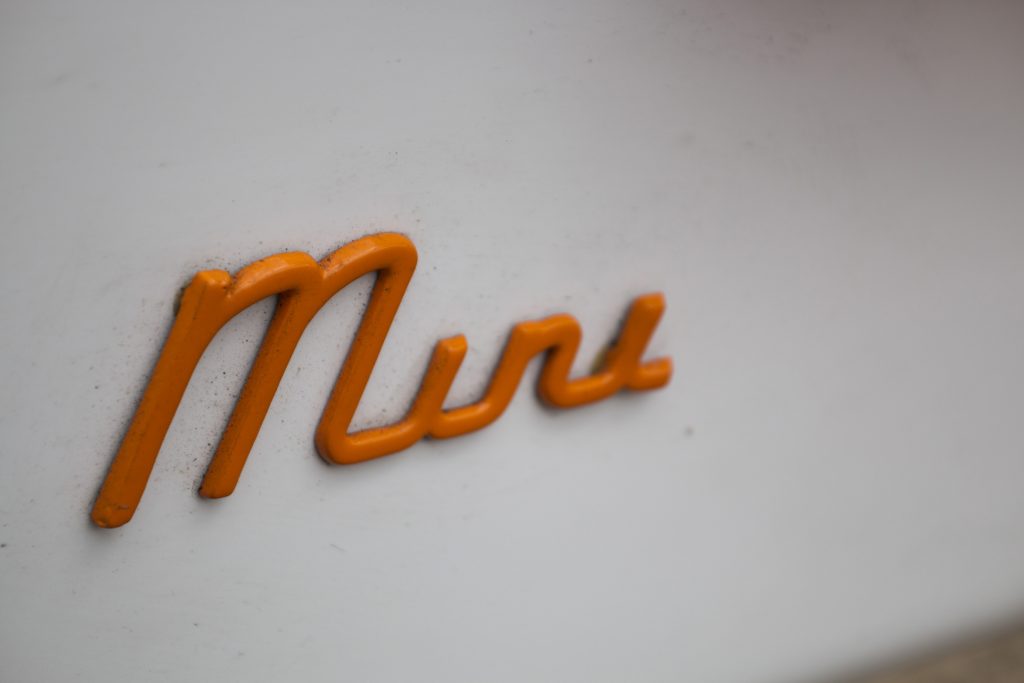 Working in such a tight knit community of skilled car craftsmen certainly has its advantages when building a project like this. Paul was able to call in favours from his work neighbours to get it built in to the spec he wanted. 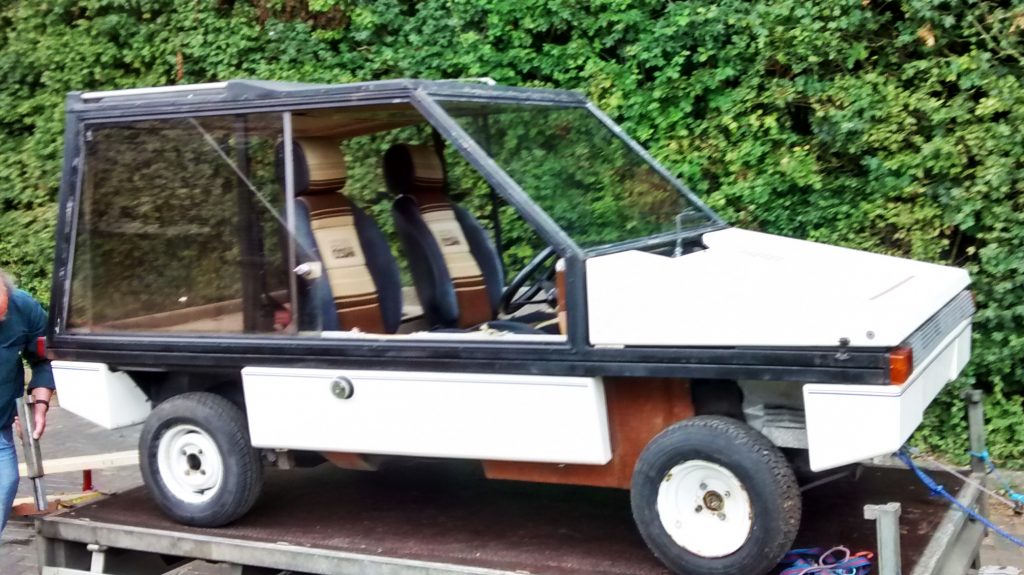 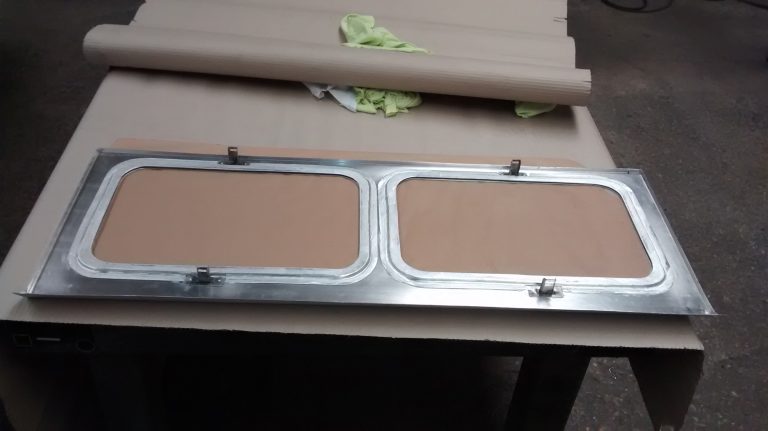 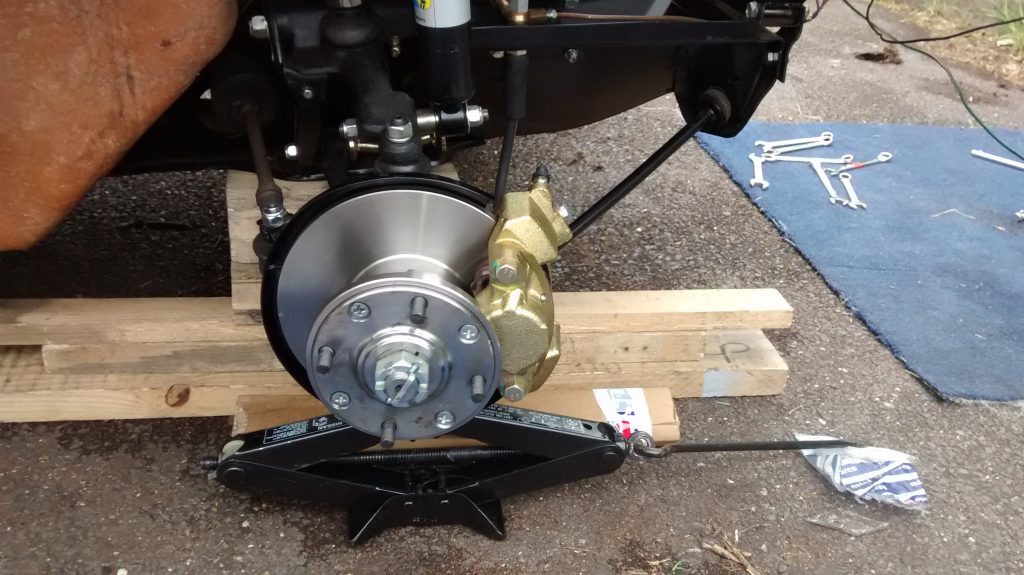 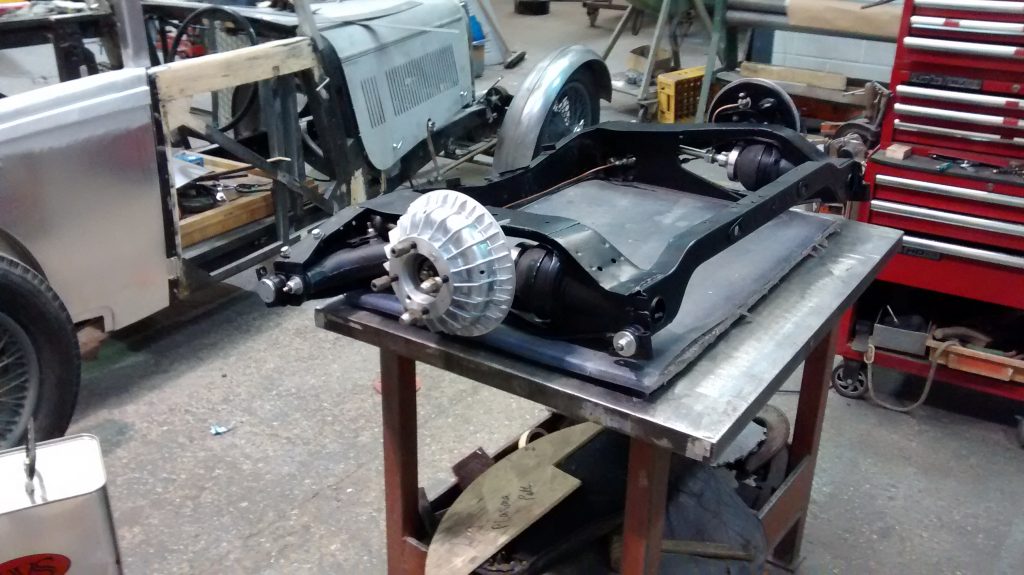 Rob Selby and Simon Fisher at Selby Engineering took care of the engine build, using Oselli parts, as well as drawing on their Mini racing expertise to give advice throughout the build. Lone Pine took care of the distinctive white with orange and grey detail paint job and Paul was able to put his own skills to use in fabricating a one-off aluminium sunroof to keep him cool on the days when it feels like he’s driving a greenhouse. 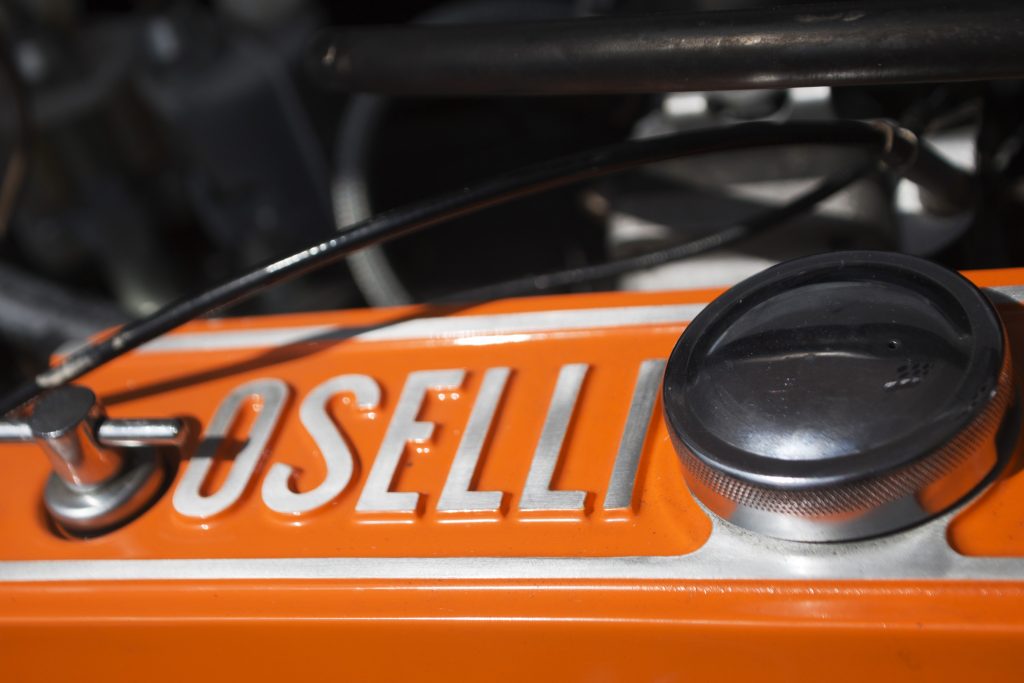 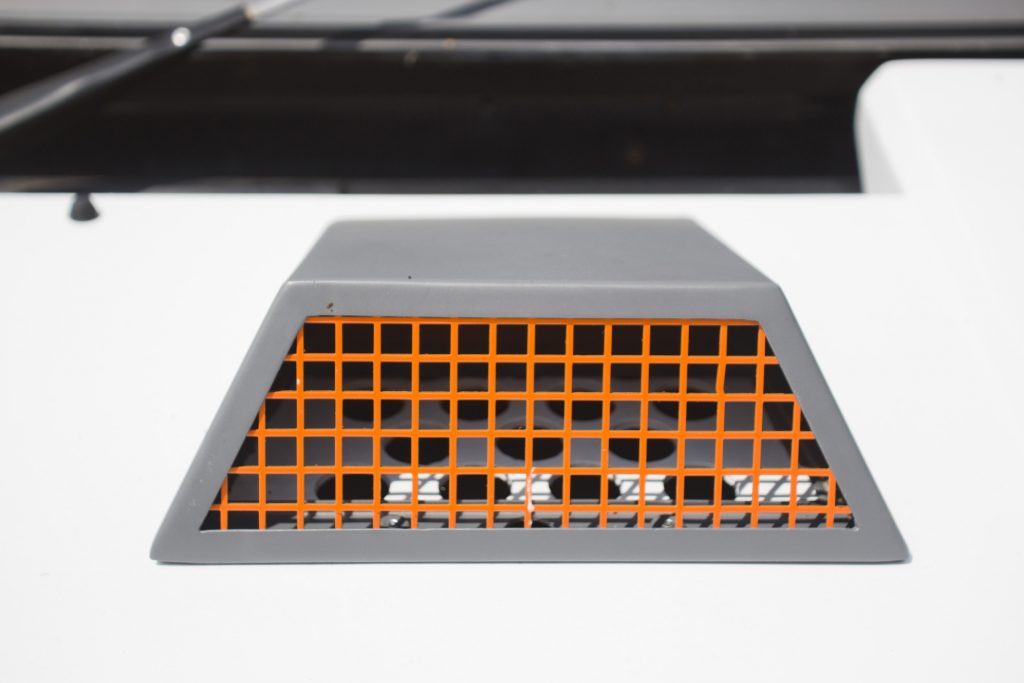 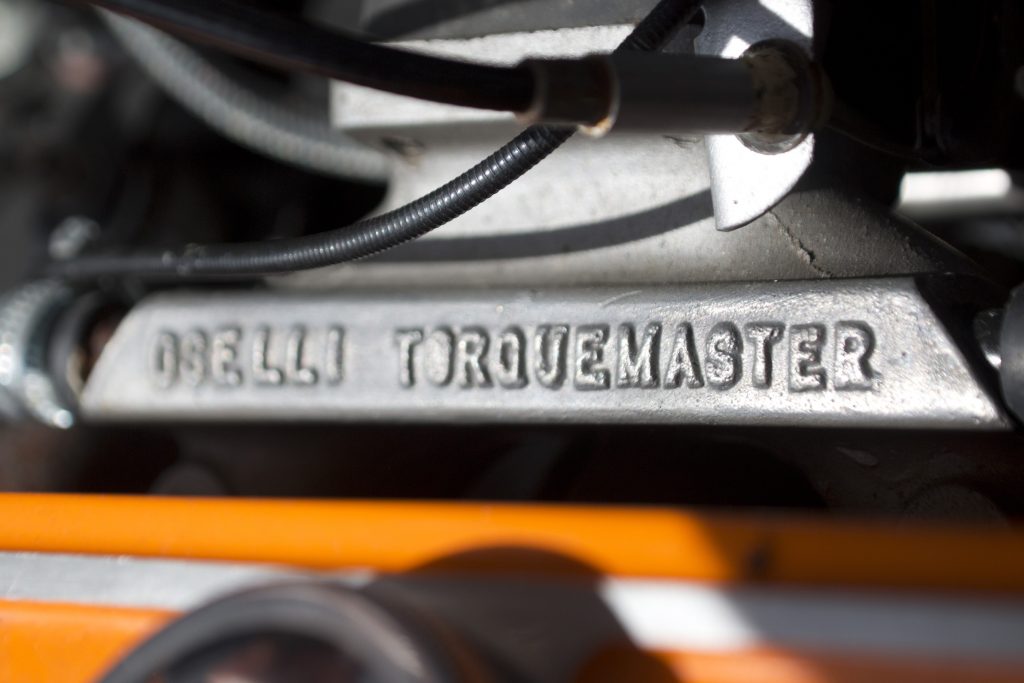 Paul assembled the car in the Bodylines workshop, alongside DB5 and Ferrari California body shells, with help from his brother in law Doug Boomer to whom he is eternally grateful. Cooper S parts, like the uber cool minifin brake drums, were used wherever possible to help the car handle and stop with the increased power from the uprated engine, although Paul admits it’s brutal to drive at speed since it’s so light and high sided. 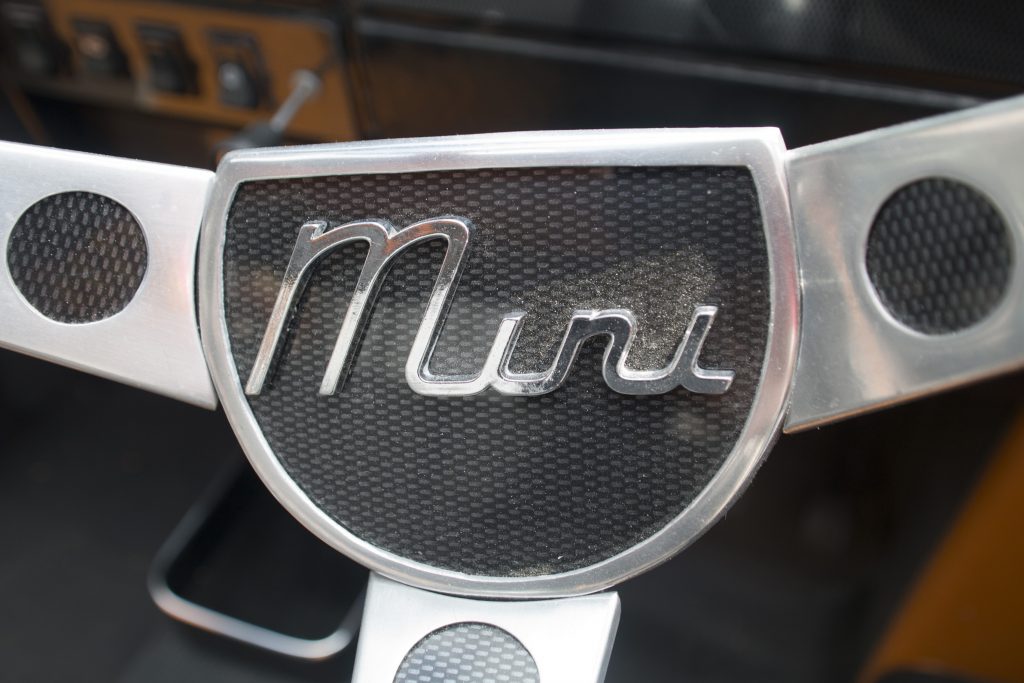 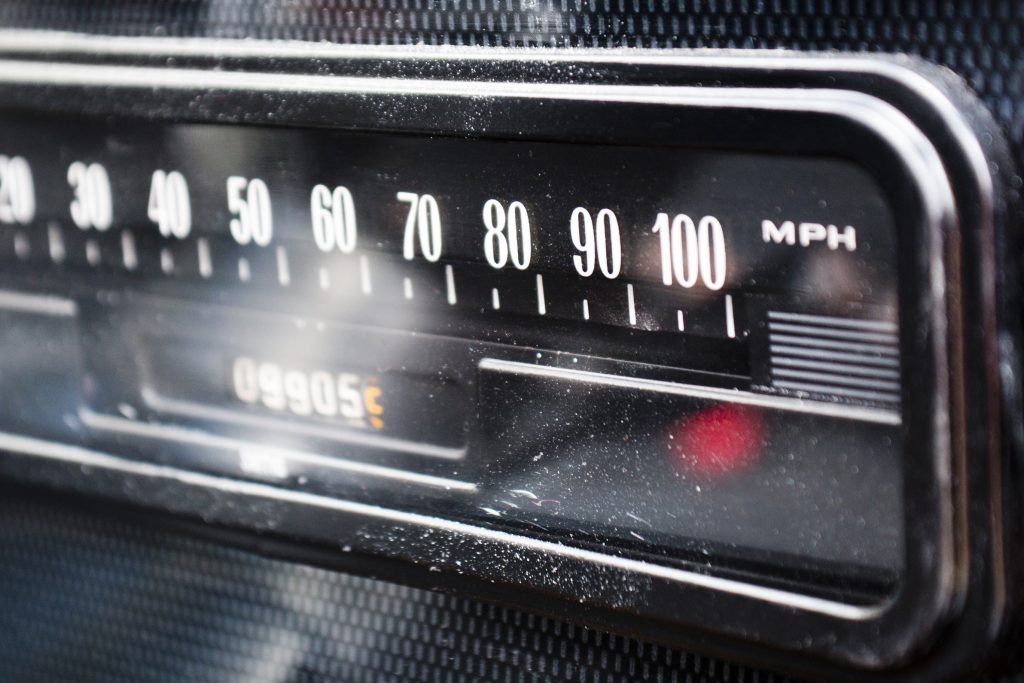 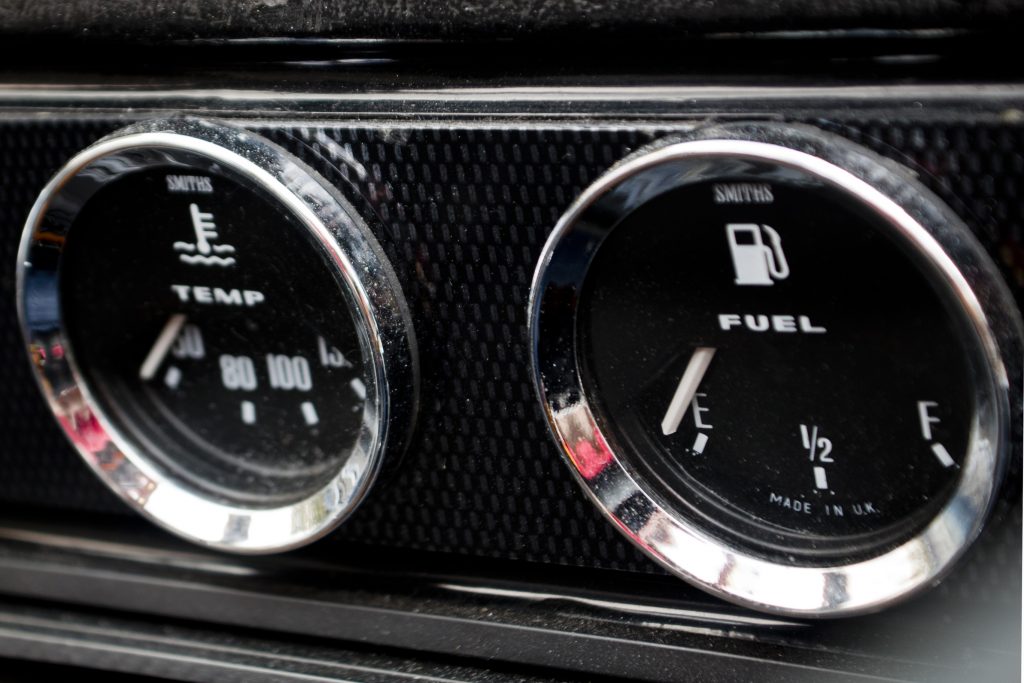 Paul is never likely to own a Lagonda, the Hustler is his way of keeping in touch with his formative automotive years and having a huge amount of fun in the process. He’s now got the Mini-based kit car bug and is embarking on the build of a Stimson Trek, a mad 3-seater creation with a central driving position. 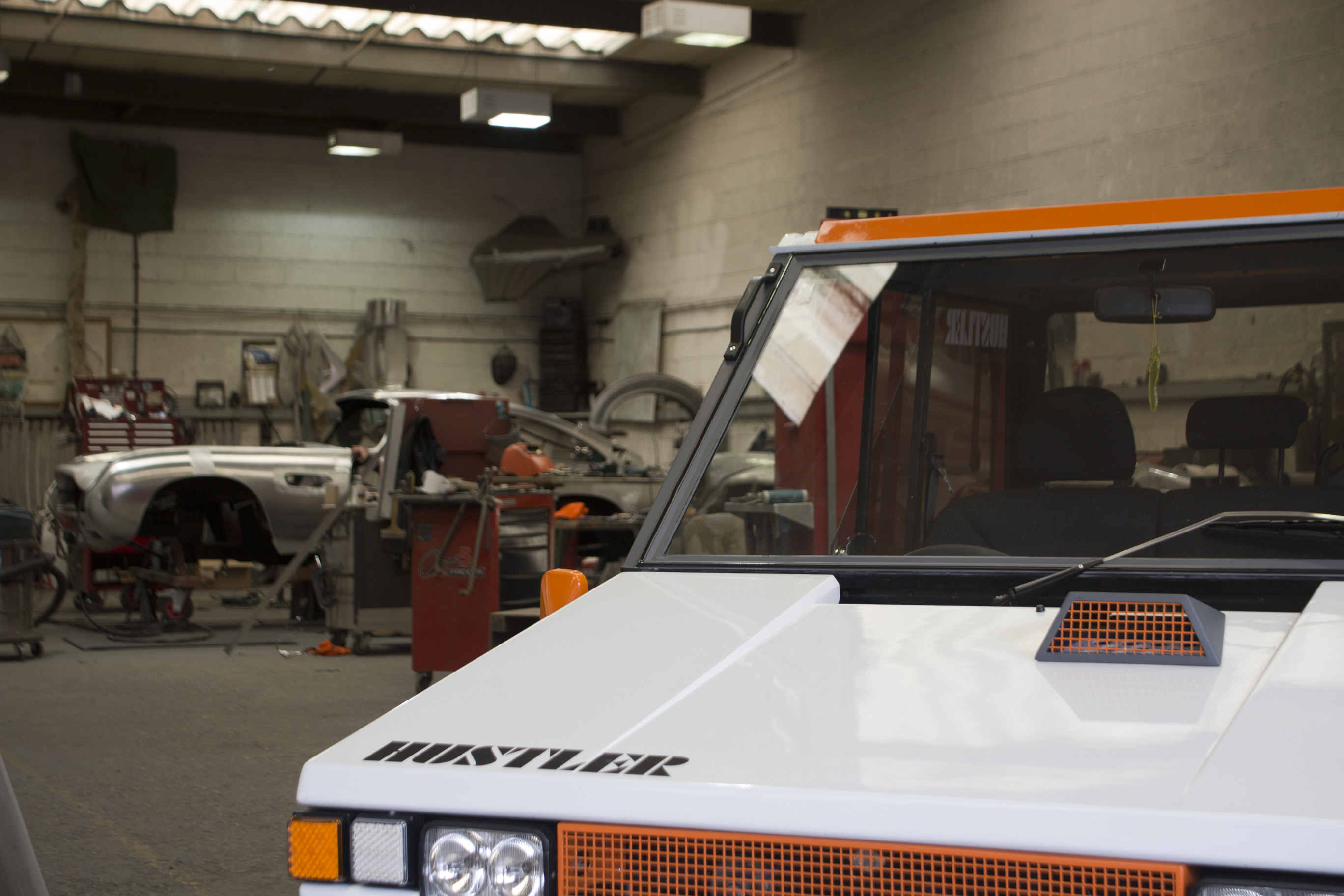 You can see some examples of Paul’s craftsmanship at Bodylines here. We’ll be telling more stories of the firms operating out of this community in the future, so be sure to follow us on Facebook and Instagram to keep updated.

Got your own Motorism story to tell? Get in touch!